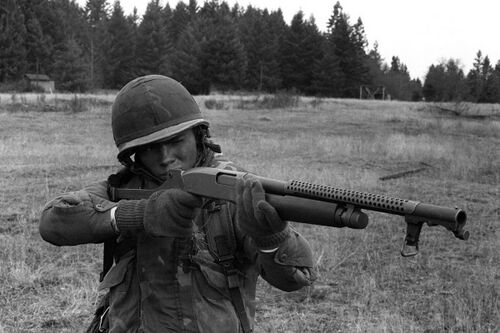 (A bit of its legend comes from the famed protest by the German Kaiser who said the shotgun went against the rules of war. At the same time, he dropped poison on the trenches that brutally killed and choked men to death. The Kaiser admittedly made a lot of protests, but the United States latched onto the trench gun protest, and the media used it extensively to mock and deride the Kaiser. That’s another story for another time.)

As time progressed, the trench gun stuck around and saw numerous incarnations, with the final being the Winchester Model 1200.

The whats and whys behind a trench gun

Trench gun is a term that applies to a number of different firearms that all serve a similar role. There are a few features and specifications a trench has to have to be considered a trench gun.

Trench guns are shotguns and specifically repeating shotguns that fire 12-gauge cartridges. However, a normal combat shotgun needs additional features to be useful as a trench gun.

First, it needs to have a short barrel of around 20 inches total. (The magazine tube typically holds four or five rounds and is rarely extended beyond that.) The reason the tube stays so short is to accommodate the bayonet and bayonet mount.

A bayonet mount is another feature that’s critical to a trench gun. In the trenches, you might need to get stabby, and close-range combat was the word of the day. The heat shield was another must-have feature of the trench gun. The heat shield protected the user’s hands, especially when things went from shooting to a melee fight.

These guns featured full-length stocks and bead sights and were fairly simple. As time passed, the Model 97 was joined by other trench guns including the Model 12, also from Winchester, as well as the Ithaca 37, the Stevens models 520-30, 620A, and many more.

Until 1964, Winchester’s Model 12 was considered THE shotgun. It became known as the perfect repeater and had a long history of military service. Yet, the Model 12 was fairly dated, with a design dating back to 1912. Further, as manufacturing improved, the Model 12 became more expensive to produce.

The action became well known for its slick design and smoothness. These guns became very popular with sport shooters, hunters, and similar shooters. Over time they became popular with the police, and finally, they got the military’s eye.

These were purpose-built trench guns from Winchester. They featured the classic metal heatshield, similar to that of the Winchester 1897. This included a bayonet mount that also held a front-sling mount. The gun held four rounds in the tube and could carry an additional in the chamber.

Some modern Model 1200s wore all-wood furniture, but there are a few pictures of troops carrying the gun with overfolding stocks. This would make them more compact and easier to store and carry. Oftentimes a troop with a shotgun would also carry a rifle.

These shotguns served in a fairly limited role and not for very long. Most were sent to National Guard armories, and many were destroyed as the Mossberg 500 later became the standard-issue shotgun. Still, the Model 1200 stuck around and even showed up in Iraq during the initial invasion.

The modern combat shotgun is no longer a trench gun. The M1014 and Mossberg 590 and 500 MILS series lack heat shields, although mounting a bayonet is an option with the 590A1 shotguns.