And then came Clark. He was what we called a Sky God. He was a master high altitude parachutist and was always under a canopy or pacing a parachute canopy for the next jump. He was a Sky God… and he would be the first to tell you all about his superiority.

Me, I was more of a sky snake oil preacher or an airborne meat torpedo…  but I accepted that.

Clark had a wife and her mother that he filled while wild tales of his domination of the skies, his wonderment, and the role he fancied as the modern-day Aeolus — the God of the winds. Neither of the women had ever witnessed his skill as a jumper, but the day to finally see him jump was coming very soon in the form of an admin day for the families to visit.

Related: SEAL TEAM 6 HAS A MASTERY OF MILITARY FREEFALL OPERATIONS

The day was to feature a Hight Altitude Low Opening (HALO) parachute jump by the self-renown Clark. Is his wife and mother-in-law were excited beyond reason that they were finally going to see their master Clark put his knees in the Aeolian breeze. The rest of us just yawned in the agony the ladies brought to our enjoyable gathering.

Clark stepped out in all his glory, wearing his cape of Aeolus and a crown forged of olive sprigs. He took them to a tall stake with a red banner hammered into the ground and explained how he would fly by and grab the banner as he landed. Yes, you can’t get closer than that if you want to see a jumper.

The girls “oooed” as he broke out his rig, and “ahhhed” as he put it on. They jumped up and down cheering and waving as he made the majestic walk to the Sherpa jump aircraft. The engines roared and the Sherpa climbed. The ladies whooped as Clark slipped through the air toward them, running his mouth like a generator during a hurricane.

It was just then that a thing, a quite supernatural thing, happened. Just feet from the stake with the red banner, Clark nosed his canopy down and he impacted hard with the ground. What a flop, yet the Clark harem thought nonetheless of him and put him back up on his pedestal. 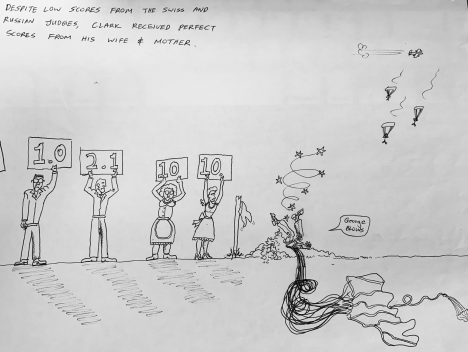 Learn more about Delta Force and other Special Operations Units: